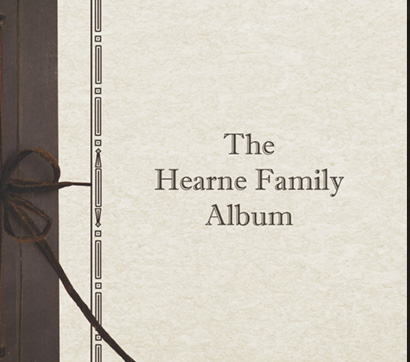 Fans of “Southwest Americana” and country music all over the world know about both Bill and Michael Hearne - two life-long artists who have pretty much defined their own genre of music in New Mexico, where they have both spent many years, and Texas, where they both were born and raised.
$ 14.99 USD
This product is out of stock.
Product is not available in this quantity.

Fans of “Southwest Americana” and country music all over the world know about both Bill and Michael Hearne - two life-long artists who have pretty much defined their own genre of music in New Mexico, where they have both spent many years, and Texas, where they both were born and raised. Bill is Michael’s uncle, and spent many years playing with his beautiful wife Bonnie, as Bill and Bonnie Hearne, becoming legends in Texas and southwestern music and influencing folks like Lyle Lovett (who used to open shows for them) and Nanci Griffith, both of whom have been guest vocalists on their albums. Michael has had a long career as the leader of Michael Hearne and South by Southwest (yeah, he had that name before those other guys with the music conference) in and around Taos, New Mexico, and then as a solo artist and frequent duo partner with Shake Russell, after he returned to his native Texas.

This album started out as a conversation between Bill and Michael about doing an album together, but it swiftly grew beyond that to a project including the many other musical Hearne’s - Michael’s cousin Eden Hinshaw, a fine vocalist out of Dallas, Michael’s two talented children Travis and Sarah, Eden’s mother Sharon and sister Julie, and even including Bill’s late brother Wendell, in the form of an old home recording of an old blues classic, as well as a song he wrote, titled, “The Violet Crown Motel”, sung by his daughter Eden. As the project progressed, it grew to include some other more distant cousins, the well-known duo of Lindy Hearne and Lynn Adler (Adler and Hearne), who contributed two of their beautiful original songs as well.

There are classic songs from Bill and Michael for their many fans, like Bill singing the Gary Nicholson penned tune “Talkin’ Texan”, and Michael singing the beautiful “The Answer Is Love”, a classic song of love, written by Michael, Shake Russell and Jimmy Stadler - a song that was actually written about Bill and Bonnie. There is also a moving group rendition of Michael’s classic “New Mexico Rain”, with the whole family joining in (with Michael, Bill, and Travis each taking a verse), as well as some precious gems from Bonnie Hearne, singing a couple of fan favorites from way back -  Gerry Spehar’s “Georgetown” and Nanci Griffith’s “Love at the Five and Dime”. There’s some great pickin’ from Bill and Michael on Peter Rowan’s “Land of the Navajo”, a song from Michael’s son Travis, a beautiful rendition of the timeless “The Water Is Wide” by Sharon, Eden, and Michael, and in general, more highlights than you can mention! All of it lovingly produced and assembled by Don Richmond at Howlin’ Dog. Any fan of this amazing musical family will want this album.