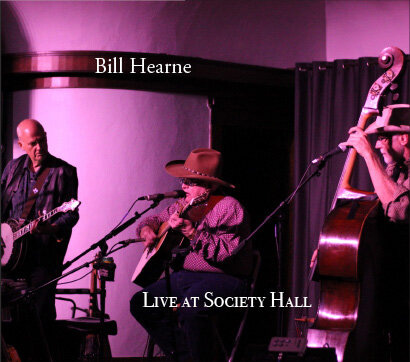 "For many decades now, audiences in New Mexico, Colorado, Texas and around the world have been enchanted by the magic of Bill Hearne’s guitar playing, and by his matchless sense of interpretation of the great songs he chooses to feature in his shows. And although fans love his studio albums, there’s nothing like the energy and spontaneity of his live shows. This is a capture of one of those magical nights, in the beautiful and acoustically transparent Society Hall, in Alamosa, Colorado. Featured with Bill on the recording are his long-time bassist Zeke Severson and Don Richmond, Bill’s producer at Howlin’ Dog Records for his last several albums. And Bill’s trio mate David Thom even gets to join in on some guest appearances via the magic of the internet and the recording studio.

For this show, Bill chose several old chestnuts and fan favorites that he hasn’t recorded for many years, making this album in some ways a retrospective reaching back to the early Bill and Bonnie years. It’s truly a collection no Bill Hearne fan would want to be without.”