Michael Hearne & Shake Russell - Only As Strong As Your Dreams 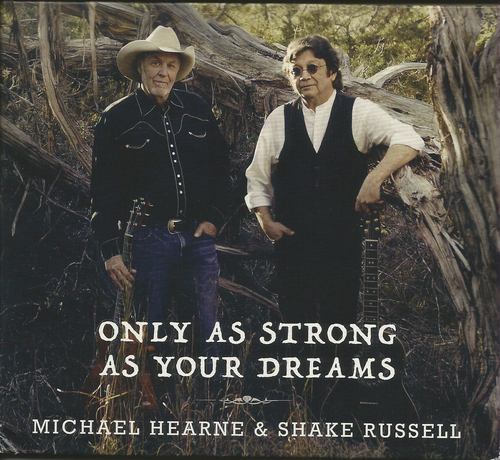 This first release by this powerhouse duo manages to surpass the high expectations generated by their successful individual careers and extensive recorded catalog, providing a journey from deep dreams to happy times in the sunlight.
$ 19.99 USD
This product is out of stock.
Product is not available in this quantity.

Michael and Shake have been songwriting partners, friends and collaborators for many years, but it wasn't until Hearne moved back to his native state of Texas, after living a few decades in Taos, New Mexico and a couple years in Nashville, that the two of them began performing regularly together.

Since then every audience they play for asks for a recording that they've done together - and so now here it is! The collection features mostly songs co-written by Shake and Michael, with a few other friends and co-writers thrown in, as in the title cut, written by poet Charles John Quarto and Shake.

This is a collection that lives up to what you expect from combining two lifetimes of singing, playing, and songwriting - deep, varied, bright and dark, hot and cool.There are stellar contributions from both Michael and Shake, but combining all the varied elements they both bring is what truly creates the magic, together with the lovingly crafted arrangements featuring co-producer Don Richmond, as well as long-time collaborators Carmen Acciaioli, Jimmy Stadler, and Mike Roberts.

Both Hearne and Russell play music in a style that is hard to categorize, but one that their label Howlin' Dog Records calls "Southwestern Americana" - a sound of wide open vistas, big blue sky, high mountains, and deep canyons, with folk, country and rock sensitivities, and stories of real people finding their way through their lives.