Pint & A Half - Boomtown Ghosts 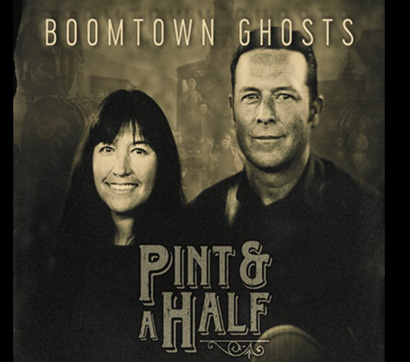 Howlin’ Dog Records is proud to introduce Americana and alt country fans to Pint & A Half, a duo from southern Colorado that is quickly making their mark both in their home region and across the country. No Depression had this to say about “Boomtown Ghosts” - “The husband-and-wife duo have quickly gained access to full alt-country credentials. This is an album that will speak to people in a way they haven’t yet heard.”

Since the release of their debut album, “Blue Sky Earth”, Pint & a Half has spent their time playing venues and festivals throughout Colorado and New Mexico, Missouri, Illinois, and Tennessee, and opening for touring Americana acts such as The Trishas and the award winning Gabrielle Louise. For a home-recorded and self- released project, “Blue Sky Earth” was incredibly well received, with over 800,000 plays (and climbing) through online radio platforms like Spotify, iTunes Radio, Rdio, and community radio stations from CO to St. Louis.

Always writing new music, Pint & a Half decided it was time to stop driving, and get some of the new songs onto a new album! Many of the new songs are rooted in their home, the quickly changing mountain town of Salida, Colorado, but resonate with universal themes of place, of change, and of love. Like many towns in the West, Salida has seen boom and bust, up and down, over and over again. The only constant is the flow of people, always migrating to a better life. While looking through historic images of these men and women, the concept of “Boomtown Ghosts” was born.

“Boomtown Ghosts” is a huge leap forward in songwriting, musicianship, and production, reflecting the natural growth born of constantly performing and observing. For this project, Pint & a Half joined forces with Howlin’ Dog producer and CO music legend Don Richmond to record, produce, and perform. Recorded at Howlin’ Dog, the crisp, true sound of excellent production, and the melodic, thoughtful-yet-rythmic songs are a perfect follow up to their debut album.