The Rifters - Live at the Uptop 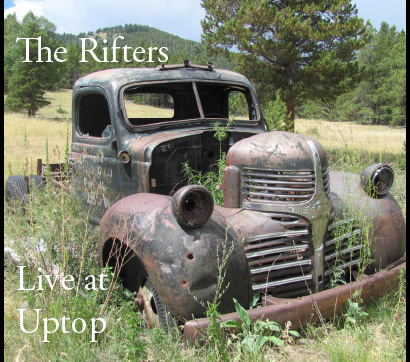 This double CD is from one night of recording, at a place that is very dear to the Rifters' hearts (and many others hearts as well) – the little ghost town of Uptop, up on top of Old La Veta Pass.
$ 19.99 USD
This product is out of stock.
Product is not available in this quantity.

From the liner notes - “So what and where is Uptop? It’s a lively ghost town, or as Don says in the introduction to the second set, sort of an “alternate reality”, perched up on top of the old road over La Veta Pass, between Ft. Garland and Walsenburg, just off of Hwy 160 in south- central Colorado. One of the buildings in the little settlement used to be a dance hall back in the early to mid 1900’s - a century when the sawmills were buzzing up there. The old dance hall, with huge tumbleweeds hanging over the dance floor, just seems to really want some music to once again make the walls sing, and some boots and shoes to once more polish the wooden floor. And we Rifters folks are more than happy to oblige! The owners ‘Sam’ (Dianne) Law and her sister Deb Lathrop (Mayor and Queen of Uptop, respectively) have invited us up to play an annual dance/concert for many years, and it has become one of our favorite events of the year. Sam and Deb felt like this wonderful gathering should be immortalized with a commemorative live CD, and we thought that sounded pretty cool, too! So on August 26th, 2017 we recorded our entire performance. It’s full of requests, and spur of the moment inspiration, with a bunch of good Uptop energy thrown in – and it’s still got a few rough edges – pretty much just like it happened. We hope you enjoy it, and if you were there when it happened, we hope it takes you back to the cool, crystalline air moving through the aspens, with the brilliant stars over the Spanish Peaks shining down, and the smiling faces of good friends. Long live Uptop!”

From Don - “The cover shot is by co-owner Deb Lathrop, and is an old truck up on blocks that was used decades ago to power a rope tow on a little ski hill about a half mile from the town site - definitely a historical relic sort of thing - kinda like us, come to think of it! It was a night of songs requests from Deb and Sam and others - pretty free and far-ranging. There's a lot of overlap with our "Live at the Sagebrush" CD, but a lot of different stuff too - even some stuff we almost never play, except after significant arm-twisting! (I mean really – the Rifters playing The Doors? Whoever heard of such a thing?) It also differs from the "Live at the Sagebrush" CD in that that CD was culled from many different nights of live recording, and the "Live at Uptop" CD is just one night - all the way through, beginning to end. Hope you enjoy it!”