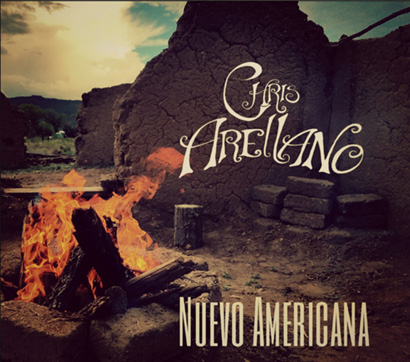 Chris is a native of Costilla, New Mexico, perched right on the Colorado - New Mexico border, about 50 miles north of Taos. He grew up playing drums for local gigs in his father’s band, but his musical journey has since taken him from the Musician’s Institute in Los Angeles, to major label record deals in Nashville, through performances in New York City to running his own music teaching academy in Oregon. He has now come full circle with his recent return to his roots in northern New Mexico.

Arellano has a remarkable range of musical influences and expressions, from the Norteno music he grew up playing in his father’s band, to the high desert folk/Americana music he learned to love in Red River, New Mexico, while learning to write songs with his friend and mentor Eddy Lee Bullington, well known to area audiences as a member (with Michael Hearne) of the popular South by Southwest band. Chris is able to blend these different musical streams seamlessly, and delightfully, in his music that he calls “Nuevo Americana”, creating a true expression of the beauty, richness and diversity of the musical heritage of his home.

If you add in his superb command of multiple stringed instruments and voice, honed by years of experience as a recording artist, studio musician and producer in Nashville, and you have the ingredients of a remarkable artist.

Nuevo Americana is a delightful journey through the range of Chris's expression and influences, from the wistful Jenny Lee through the driving yet yearning Diamond Jane to the upbeat Norteño of Despedida, the light-hearted Hot Damn Chili and the driving blues of Cold Heart Woman. Las Nubes is a delightful reworking of a Spanish classic rendered with a sweet and airy folk-Americana treatment, and is a great example of Chris's ability to reach across cultural divides to find new blends of the beauty common to both.