The two-time folk Grammy nominee announces the release of Songs From the River Wind, a love letter to the Old West

Taos, NM: Renowned songwriter Eliza Gilkyson has announced the follow-up to her critically acclaimed political masterpiece, 2020, which topped the folk radio charts and won Eliza the “Best Song of the Year” award from the Folk International Alliance. Her new album, Songs From the River Wind, is what she calls her love letter to the Old West. It’s composed of snapshots of the people and places, lives and loves lost and found over her years of wandering the West as a musical minstrel, searching for her heart’s home. The album will be out January 14, 2022 on Howlin’ Dog Records.

Feeling the need to take a little break from the socio-political music that she felt compelled to write for her last six albums, the twice Grammy-nominated artist moved her base from Austin, TX to Taos, NM. Inspired by memories of characters and events that birthed her enduring love affair with the West, the songs span 40 years — from originals to vintage classics — and culminates with her recent decision to relocate permanently to Taos, where she is sinking down deep roots at long last.

With a nod to her dad, folksinger Terry Gilkyson and his 1950s folk group “The Easy Riders,” who recorded original and traditional folk songs with a distinctive western flavor, Eliza joined forces with her old friend Don Richmond to produce the record, enlisting Don’s much loved Southwest band “The Rifters” to sing backup harmonies. The group shines on Eliza’s version of The Easy Riders’ version of the traditional tune, “Wanderin.’”

“The ‘Rifters’ are like the twenty-first century version of the ‘Easy Riders,’” Eliza says. “My dad would have loved them, and to have them sing and play on this record with me is icing on the cake. It’s all part of bringing these disparate parts of myself together and bringing my past into my present as a songwriter and as a whole person. It has been an enlightening adventure for me.”

As always, Eliza enlists top-notch musicians for the sessions, with cameos from Warren Hood on fiddle, Kym Warner on mandolin, and Michael Hearne on vocals. Songs from the River Wind finds Eliza performing old and new originals, select cover songs that fit the theme, and a few adaptations of venerable old cowboy tunes adapted to a female perspective, including “Buffalo Gals Redux” and “The Colorado Trail.”

“‘Colorado Trail’ is an old western tune I adapted to my own story. I wrote it after a show late one night driving the back roads of Colorado heading to the next gig. Empty road, big sky filled with stars, broken white line, broken heart. I got the last verse off of an old ‘Sons of the Pioneers’ recording which just slays me."

“The Hill Behind This Town” was inspired by her memory of getting her own place for the first time. “My first rental — if you can call it that — when I left home was an old wooden boxcar that sat up on cinderblocks beside the railroad tracks in Lamy, New Mexico,” she recalls. “It had two good-sized rooms with beadboard walls and ceilings, and two holes in the roof for a wood cook stove and then a regular wood stove for heat. It was cozy and all mine, $15 a month, and it rattled like crazy when the trains thundered by just feet away. If you climbed up the hill out back you could watch the sun set.”

Flashing forward to the present, “Don’t Stop Loving Me” is a love song not only to a partner but a place, embracing the expansive vistas and gorgeous sunsets of the West and celebrating the home you expect to be your last. “Settling down in the West after a long hiatus, my heart is full and my spirit soars like a hawk — it feels like I’m suspended in a beautiful dream,” she says.

Don and Eliza went for the kind of western/folk sound that highlights her love of storytelling and true blue characters, her love of the rivers and the mountains, and her joyful return to the high desert plateau “at the foot of the Mountain” she now calls home.

Eliza quotes the Irish poet George Moore, who said, ‘A man travels the world over in search of what he needs and returns home to find it.’ “The same can be said for this woman, a wanderer who loved the road and the music life but who was always hoping to find her true home in the world,” she says.

Songs From the River Wind is the story of that quest, the lives and loves, the people and places in her beloved West, and the river of longing that brought her to the place where she could finally rest her bones and feel, with certainty, that she was home.

For tour dates and more, go to https://elizagilkyson.com

5. Wind River and You

7. The Hill Behind This Town

9. Before the Great River Was Tamed

10. At the Foot of The Mountain

Go to http://elizagilkyson.com for updates. 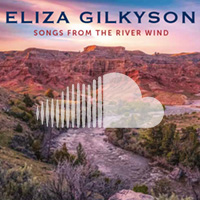 Eliza Gilkyson - Songs From the River Wind Release - Soundcloud stream
FOR REVIEW ONLY - please do not share link. 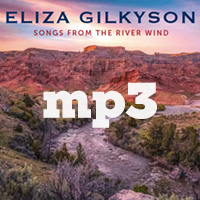 Songs From the River Wind MP3s
FOR REVIEW ONLY - please do not share link. 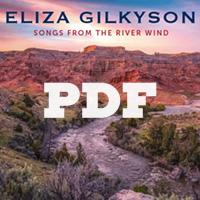 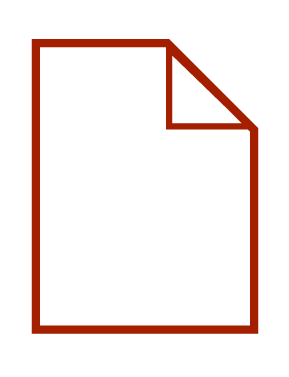 "Notes on the Songs" .pdf 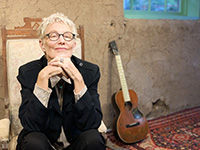 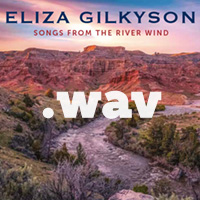 Songs From the River Wind .wav files
FOR REVIEW ONLY - please do not share link. 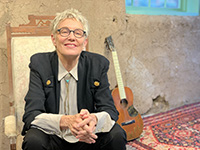 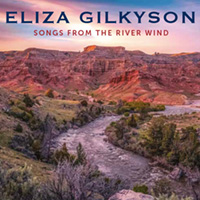