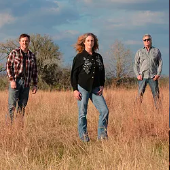 Different paths wove together long enough for 2-Bit Palomino to release three CDs and win the Vocal Group of the Year Award in both 2011 and 2013 from the Academy of Texas Music. The trio consisted of singer-songwriters Andi Renfree, Ren Renfree, and Bill Ward. Founded in March of 2010, their paths have recently taken them down different roads with the Renfrees moving to Nashville, TN, and Ward remaining in Houston, but the group does get together for the occasional special gig.

The trio’s third and last project titled “Things I Dream About”, was produced by veteran engineer, producer, and multi-instrumentalist Don Richmond.  The CD is a collection of beautifully written songs that will take you on a melodic journey highlighted by the groups’ award-winning harmonies.